To be the perfect idol before the fans at all times everyday begins in front of
the mirror from the break of day. 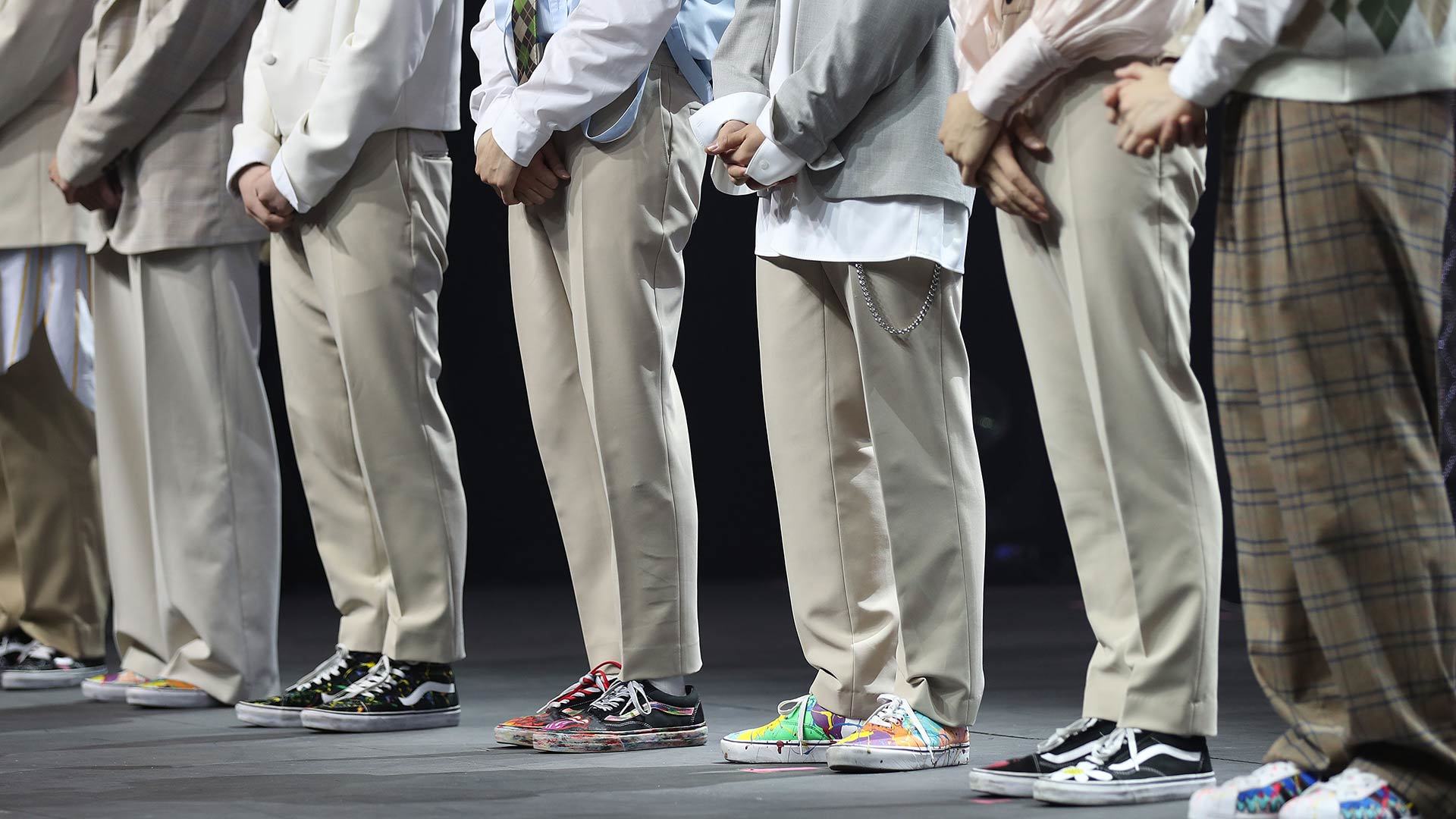 Idol in my pocket

T1419 is a male idol group who debuted in January of this year. MLD Entertainment, which also produced Momoland, and Sony Music, a global music company, are joint creators behind the group. Aimed at targeting a wider audience across the globe, five of the members are Korean and four are Japanese. The auditions in Tokyo and Osaka to recruit Japanese members back in 2019 attracted more than 5,000 aspiring idols-to-be. 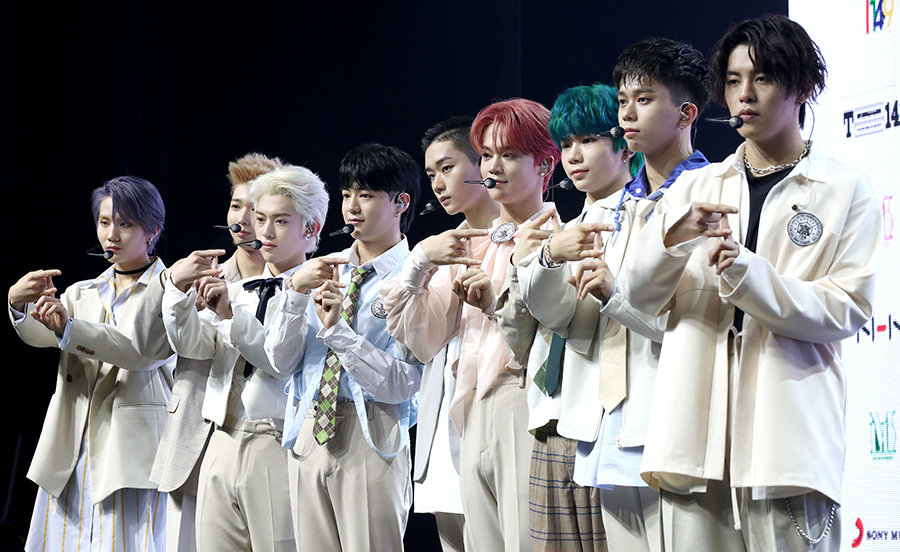 Though the group had made its debut, the Covid-19 pandemic has kept them from meeting with fans in person. One alternative is what’s called a ‘fan-signing event via video call’.
Each member is given 1 minute and 30 seconds in front of a smartphone. Staffs keep an eye on the clock and when the time’s up, they pass the phone to the next member. This kind of rotation allows the fans to meet all the members in turn.

On April 16th in a café located in Hapjeong-dong, Seoul, a fan-signing event took place through a video call. There were a total of thirty fans that won the opportunity to meet their idols on video on that day - who came from seven different countries - Korea, U.S., Japan, Canada, Netherlands, Germany and Spain.
“Bokuga utaga sukidesdego(I like to sing but). Um…
kare wa(He)….”
Kevin, one of the Korean members in the idol group T1419 was looking into the smartphone, having a conversation in Japanese. He stuck out his right hand gesturing at a fan on the screen, but couldn’t remember the word for ‘you’ in Japanese. “You too, have to like the song. Wakarimasuka (did you understand)”
With a sheepish smile for a moment, Kevin waved to the fan on the screen when a staff member signaled that time’s up.

Right after his turn at the call, Kevin asked another Korean member, Gunwoo, sitting next to him.

“How do you say ‘you’ again in Japanese?”
“Anata”.
“Oh yeah, right.”
14 hours ago
The day of the fan-signing event had actually begun much earlier for T1419, even before the sun was up, at 5 am.
Kevin’s phone still had the results of the game of ghost leg; a pair of alarms set at 5 am and 5:30 am. The previous evening, like any other, the nine members played a game of ghost leg to decide whether they’ll be the advance or second group to head out to the hair salon the next morning. Such arrangement allows members to compensate for the sheer lack of sleep, even if it meant sleeping for just more 30 minutes.
The group was in the third week of their comeback promotion for the second single.

The previous day had been another busy day for the group; fully packed with a music program appearance, a fan-signing video call event and dance practices. Kairi, one of the Japanese members, chuckled at the reporter next to him when he said he ‘wasn’t sleepy’, but with warm air emitted from hairdryer he couldn’t help closing his eyes. The music program was scheduled to broadcast live at 5 pm, but due to rehearsals, performers have to arrive on set before 9 am.
After the live stage performance at 6 pm, the members hurried to grab some dinner with delivery food then each signed 30 albums to send to the fans that will be attending the signing event. The event kicked off at 8 pm then ended after 10 pm.
After the signing event Leo and Sian, admittedly the most fluent ‘English speakers’ within T1419, started conversing in English. It was their way of warming up before meeting with fans in the U.S. and Latin America through a Facebook live streaming video due to begin at 11 pm.

The topic for the live streaming that day was about reviewing snacks from Korean convenience stores, which was received with wild excitement from South American fans. Feeling sorry to be at a loss with all the zapping comments in Spanish, the two members did their best by cheerfully closing the event saying “Gracias (Thank you)” in Spanish.
“Whereas idols in the past would only be seen at concerts then disappear surrounded by security guards, these days you can just take them straight out your pocket and see them right away if you want. Visual contents have to be constantly supplied to fans via social media and communication with the fans is a must. Fans, in turn, can then open up to idols and be committed as if they are treating their lovers.” (Lee Hyungjin, head of MLD Entertainment)
In contrast to their first online fan-signing event in January, when all T1419 could say to the fans was ‘thank you’ because they didn’t know what else to say, such events became more entertaining and familiar to them as time went by, to the extent that they would say things like they were quoted from a movie. “(Holding a water bottle) Drink this, then you have go out with me, okay?” “I’m genuinely a sweet person. You’ll eventually fall for me.” “Don’t stay up too late. That’s the best way to stay fit.”
“The fans give us a lot of courage and as we get know each other better, I can readily say more sweet things to them. We all know it’s just pretend, of course. I get only 1 minute and 30 seconds with each fan so what matters is that we have fun, even though it’s for a brief moment” (On, member of T1419)
Each member uses their own social media accounts to ask fans “how everyone’s doing” and even share personal playlists. Members’ birthdays, 100th day anniversary of the group’s debut, even children’s day and parents’ day are all occasions for the group to meet with fans via live streaming events. The group’s YouTube channel has a long list of self-made entertainment shows and behind the scenes clips that reveal a new side of the members. If viewers who just finished watching the group’s music video follow the YouTube algorithm that guides them thereafter, they will even be able to find out whether each member is a ‘mint chocolate enthusiast’ or a ‘mint chocolate hater’.
‘Increased recognition on social media and YouTube → Growing fandom → Entry into overseas music charts → Dome concerts in Japan → Concerts in U.S. and Europe’

The resounding success of BTS on a global scale has made these milestones ’indispensable’ for all K-pop idols. In a 2019 interview with the Times, Bang Sihyuk, the Chairman of Hybe Entertainment commented on the efforts to connect the artist and fans through the BTS universe.

“Fans of BTS as well as other K-pop idols desire to become a part of the lifestyle of the idols they love so much. However there’s no such product in the market that can satisfy such needs. Fans of other non K-pop singers, to be fair, likewise love going to concerts, buy albums as well as T-shirts. K-pop idol fans, however, want something more intimate with their idols. In this vein, involving the BTS fandom and being committed to them is one of the primary services that Big Hit provides as an entertainment company.”
Recently, T1419 began exchanging messages with fans on KakaoTalk, a mobile messaging app. Rather than answering to multiple fans at the same time, it mimics actual 1:1 KakaoTalk conversations. Fans can send messages and questions to specific members through the official channel, and get replies from the member himself. The reporter also joined in, by sending a direct message to Sian, who replied not long after.
“Teens are part of a generation that knows more than anyone, the importance of ‘direct involvement’. KakaoTalk was the platform that we sought for, given its familiarity and friendliness. Every time we hear fans say ‘it’s like talking to a real friend on Kakao’, we think that it was the right way to go” said Park Heeyoung, vice president at MLD Entertainment.

Instead of using personal smartphones, the members use computers equipped in the company office and take the time to write back to the fans, for at least 30 minutes or even hours at times.

“There are so many incoming messages that it’s impossible to keep count. Still, it’s a lot of fun sending messages back one by one. They encourage us as fans, and they’re nice people taking interest in us and giving us lots of energy.” (Leo, member of T1419)
Fans are always by their idols’ side throughout all the ups and downs. They emphatically join in happy occasions as if it’s their own, and in times of sorrow they collectively voice their opinions on the idol’s behalf.
Ahead of the 100th day commemorative V-live streaming on April 20th, Kevin was taking some time off resorting to a painkiller. He had recently suffered a shoulder injury while dancing on the performance for a TV broadcast. He tried his best to not to show it, but he couldn’t help taking his hand toward the hurting shoulder on stage. ‘Kevin, are you okay?’ ‘Are you not feeling well?’ worried fans started sending comments in real time.

In another TV music show the following day, Kevin kept his left hand by the waist throughout the whole dance, which prompted the hashtag “PROTECTKEVIN” on Twitter alongside other tweets demanding the company ‘to give Kevin time off’. In response to the fans’ requests, MLD Entertainment announced on April 22nd that “the group’s last appearance on music shows would take place on the 25th”.

5pm on May 13th at the Nuritkum Square located in Mapo-gu, Seoul. T1419 held an offline fan-signing event, as the last official appearance for their promotion of the 2nd album. Due to Covid-19 restrictions, only 50 fans were invited. The fans on premise who brought so-called ‘daepo(literally meaning cannon)’, which are high resolution DSLR cameras with telescopic lenses, constantly took pictures of their ‘bias(favorite member)’.
Rejung(nickname used on fan club sites, age 23), an office worker who got to be the first fan to enter the event said “the event was first come first served basis, so as soon as the link for the registration opened, I kept (reloading the page) at it as if I was enrolling for college courses”. Soonae(fan site nickname, age 23) who got number two, mentioned “I can really feel that T1419 is doing their utmost and trying very hard. The contents they create for fans never dry up and they even exchange KakaoTalk messages with the fans. I think this kind of relationship can go on for the rest of my life.”
5 months passed since their debut, the T1419 fans finally got their name - ‘Eidelweiss’, as voted by fans. T1419 members have posted messages directed at the fans saying “Good night Eidels” “Sweet dreams Eidelweiss! We love you” ”Our Eidels!! Hope you enjoy lunch!” 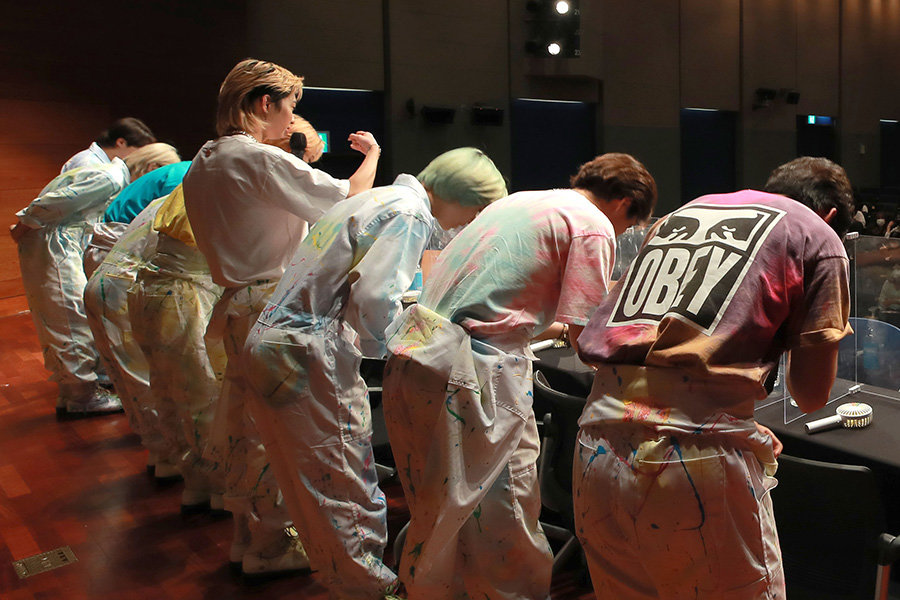 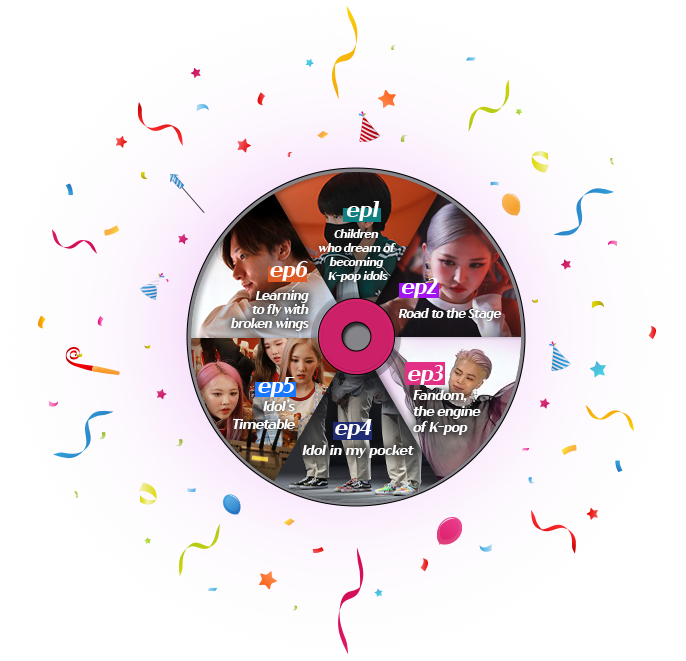